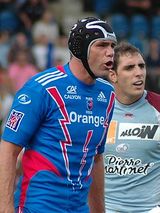 Auradou was part of the Stade Français team that won the Coupe de France in 1999, when they beat CS Bourgoin-Jallieu 27–19 at Saint-Etienne. The following season his club also featured in the final of the French championship, in which they won, defeating the US Colomiers 28–23 at Stade de France. The club went onto feature in the final of the 2000-01 Heineken Cup, but were defeated by the Leicester Tigers.

The following year he made his international debut for France during the 2002 Six Nations Championship, in the 33–12 win over Italy in Paris. He played two more matches during France's Six Nations series, against England, and then against Ireland, as a replacement. France went onto win the tournament. He also played another international that year, against Canada, in Paris.

In 2003 he played in three of France's Six Nations, as a replacement against Scotland, Italy and Wales. He then went onto play for France in matches against Argentina, the All Blacks and England, and was then included in France's 2003 World Cup squad. During the World Cup, he was capped against Japan, the USA, and the All Blacks.

In 2004 he played four times for France, all during the Six Nations that year, as a...
Read More