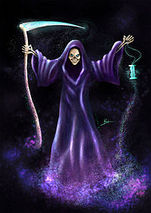 Description:
Death is a fictional character in Terry Pratchett's Discworld series and a parody of several other personifications of death. Like most Grim Reapers, he is a black-robed skeleton usually carrying a scythe. He does not appear to be Death in the universal sense; his jurisdiction, so to speak, appears to be only the Discworld itself.

Death's hollow, peculiar voice is represented in the books by unquoted ; since he is a skeleton, he has no vocal cords to speak with, and therefore the words enter the head with no involvement from the ears. His "voice" is often described using a morbid metaphor, such as two concrete blocks being rubbed together, or the slamming of coffin lids; these descriptions have become less frequent in recent novels. In the first Discworld novel, The Colour of Magic, as well as in Eric, all direct written references to Death are proper nouns; thus, for example, "he" is written as "He." This is usually reserved for the Discworld gods and is not featured in any of the other novels.

Death is not invisible; however, most people's brains refuse to acknowledge him for who he is, unless he insists. Under normal circumstances, only those of a magical disposition (e.g. witches and wizards), children, and cats can see him, or allow themselves to see him. Due to his eternal nature, Death can ignore such things as walls or magic spells; he exists through all time, and therefore things lasting merely centuries are not as real as he is. He...
Read More