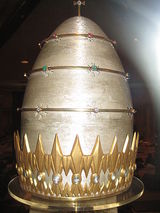 Decoration Of The Papal Tiara

Decoration of the Papal Tiara

Description:
From the 15th century when the papal tiara received its third and final tier, the decoration of papal tiaras followed a standard format. The Papal Tiara itself was laid out in felt, over which a silver mesh was laid. Onto that mesh, three bands (the three crown) were screwed. Each crown in turn was decorated with rubies, sapphires and other precious jewels. The tiara was topped off with an orb and a crucifix and had lappets attached at the back.

Unlike most monarchies, the papacy did not have one special crown that was used by all popes. In part that was due to the series of destruction of old tiaras that has occurred when at various times Rome had been invaded and papal property, including tiaras, stolen. In part, during the 19th century it was due both to the growing wealth of some Catholic sees, which enabled them to donate expensive new crowns to the papacy when their cardinal was elected pope, and also the political travails of mid and late 19th century popes.

Catholic states like Spain and Belgium donated expensive crowns to Pope Pius IX as symbolic acts of support; following his restoration to Rome after the collapse of the Roman Republic in 1850, and following his loss of Papal States in 1870 respectively, with new tiaras arriving from the Queen of Spain and the women in the Royal Court of the King of the Belgians in 1855 and 1871. Monarchs who had also clashed with the Church, such as Kaiser Wilhelm I of Germany, also used the donation of tiaras as...
Read More