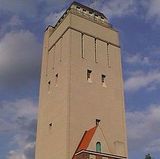 Description:
Delmenhorst () is an urban district (Kreisfreie Stadt) in Lower Saxony, Germany. It has a population of 74,500 and is located 10 kms/6 miles east of downtown Bremen with which it forms a contiguous urban area, whereas the city of Oldenburg is 25 kms/15 miles to the northwest. The city has a total area of 62.36&nbsp;km² and a population density of approx. 1200 inhabitants per km².

Since 2006 it is governed by the mayor Patrick de la Lanne.

Delmenhorst was first mentioned in a charter in the year 1254, after the Count of Oldenburg, Otto I, bought the place near the river Delme in 1234. A castle to protect the newly founded settlement was established in about 1247. The following count, Otto II, made the castle his residency; Delmenhorst was declared an independent town on 15 July 1371 under Bremen's law.

After a short period under the governance of the bishop of Bremen from 1421 to 1436 Delmenhorst returned under the custody of Oldenburg. Delmenhorst later was infamous for its robber-baronship under the count Gerd. Its reign ended in 1482 thanks to a siege laid to the castle under the leadership of the bishop of Münster. Therefore the town now was under Münster authority until finally count Anton I won back the town as well as the castle in 1547.

When the last heir of Anton, Christian, died in 1647, Delmenhorst again fell under Oldenburg custody. As the Oldenburg regent of that time was a relative of the Danish king, Delmenhorst was thereafter under Danish...
Read More