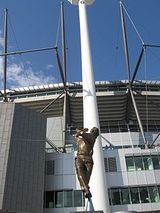 Description:
Dennis Keith Lillee, AM, MBE (born 18 July 1949 in Subiaco, Western Australia) is a former Australian cricketer rated as the "outstanding fast bowler of his generation". Lillee was known for his fiery temperament, 'never-say-die' attitude and popularity with the fans.

In the early part of his career Lillee was an extremely quick bowler, but a number of stress fractures in his back almost ended his career. Taking on a strict fitness regime, he fought his way back to full fitness, eventually returning to international cricket. By the time of his retirement from international cricket in 1984 he had become the then world record holder for most Test wickets (355), and had firmly established himself as one of the most recognisable and renowned Australian sportsmen of all time.

On 17 December 2009, Lillee was inducted into the ICC Cricket Hall of Fame. Dennis Lillee has done great service to the art of Fast bowling by contributing immensely at the MRF Pace Foundation in Chennai, India.

Aged 20, Lillee made his first-class debut for Western Australia in 1969-70 and impressed with his raw pace. At the end of the season, he toured New Zealand with an Australian second team and took 18 wickets at 16.44 average.

The following season, he made his Test debut in the Sixth Test at Adelaide in......
Read More