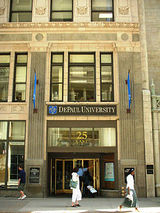 Description:
DePaul University College of Law is a law school located in Chicago, Illinois, USA. Founded in 1897 as the Illinois College of Law, the school became part of DePaul University in 1912 and is one of the academic colleges of DePaul, a Big East Conference university. The College is known for its Intellectual Property Law program , headed by Professor Barbara B. Bressler, and its Health Law program, headed by Professor Nanette Elster. Both programs have garnered top 20 placements in the U.S. News & World Report rankings in recent years. In 2004, the school established the International Aviation Law Institute, the first of its kind in the United States. DePaul University College of Law is ranked amongst the "Top 100 Law Schools" in the United States by the U.S. News & World Report Graduate School Ranking.

In 1958, the College of Law moved from 64 East Lake Street to its new and current home in the Lewis Center at 25 East Jackson Boulevard. The 18-story Lewis Center, formerly known as the Kimball Building, was given to DePaul in 1955 by the Frank J. Lewis Foundation and was at that...
Read More