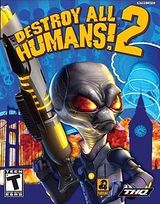 The game is set in 1969, 12 years after the original. The game begins with a KGB slide show meeting showing that the main character from Destroy All Humans!, Cryptosporidium-137, is now deceased for unknown reasons. His clone, Cryptosporidium-138 (Crypto for short), made of more pure furon DNA, is now taking his place and continuing to pose as the United States President. KGB intelligence reveals that Crypto-138 is the first and only Furon to have genitalia, referred to only as "The Package". Seeing the furons as a threat to the Soviet Union, the KGB destroy the furon mothership with a nuclear missile.

Soon after, Crypto's new adventure begins. Not only must Crypto stop the KGB from destroying America, he desires revenge for the destruction of the mothership. Crypto's commander, Orthopox 13, downloaded a copy of his consciousness into a holographic unit (called a HoloPox Unit) just before he died. The unit projects a hologram of Orthopox...
Read More