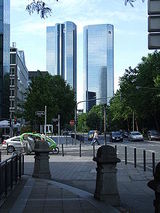 Description:
The Deutsche Bank Twin Towers (German: "Deutsche Bank Zwillingstürme" or "Deutsche-Bank-Hochhaus") consists of two skyscrapers that are each 155 meters high. They are also called debit and credit (Soll und Haben), or German bank called Twin Towers I and II. It is the headquarters of Deutsche Bank Group, located in the banking district in Frankfurt, Germany. It is one of the best known buildings in Germany because of its high media coverage.

The Taunusanlage S-Bahn station is located at the foot of the building. The largest man-shaped monolith of the world, created by the Swiss sculptor Max Bill, is located in front of the entrance.

The skyscraper was built from 1979 to 1984 according to designs by Walter Hanig, Heinz Scheid, and Johannes Schmidt. It stands on the Taunusanlage near the Old Opera House, at the beginning of the Mainzer Landstrasse, and the border districts of the West End, downtown and railway station district. The towers were originally planned as a hotel for the American Hyatt Hotel Group. When taken as the towers of the Deutsche Bank, they were already under construction. Immediately outside the main entrance are the entrances to the underground train station Taunusanlage. South and east there is the green area of the city walls, the dramatic views of the buildings provide, to the west joins the axis of the tower at Mainzer Landstrasse (followed by a short distance between the skyscrapers of Trianon, Frankfurter Büro......
Read More