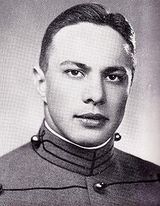 Description:
Felix Anthony "Doc" Blanchard (December 11, 1924 – April 19, 2009) is best known as the college football player who became the first ever junior to win the Heisman Trophy, Maxwell Award and was the first ever football player to win the James E. Sullivan Award, all in 1945. He played football for the United States Military Academy at West Point. Because his father was a doctor, Felix Blanchard was nicknamed "Little Doc" as a boy. After football, he served in the United States Air Force from 1947 until 1971 when he retired with the rank of Colonel.

Blanchard was born on December 11, 1924 in McColl, South Carolina Fimrite,Ron: "Mr. Inside & Mr. Outside, Sports Illustrated, November 21, 1988. His father was a doctor and had played college football at Tulane University and Wake Forest University. Blanchard, nicknamed "Little Doc" due to his father's occupation, attended high school at Saint Stanislaus College in Bay St. Louis, Mississippi. He led the school's football team, the Rockachaws, to an undefeated season during his senior year in 1941. Blanchard was recruited to play...
Read More