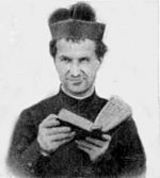 Description:
Dominic Savio (; April 2, 1842 – March 9, 1857) was an Italian adolescent student of Saint John Bosco. He was studying to be a priest when he became ill and died at the age of 14, possibly from pleurisy.

His teacher, John Bosco, had very high regard for Savio, and wrote a biography of his young student, The Life of Dominic Savio. This volume, along with other accounts of him, were critical factors in his cause for sainthood. Despite the fact that many people considered him to have died at too young an age – fourteen – to be considered for sainthood, he was considered eligible for such singular honour on the basis of his having displayed "heroic virtue" in his everyday life. He is the only saint of his age group, which includes Maria Goretti (age 11) and Ponticus of Lyons (age 15), who was declared to be a saint not on the basis of his having been a martyr, but on the basis of having lived what was seen as a holy life. He was canonised a Saint on June 12, 1954 by Pope Pius XII,Catholic-forum.org: ; Retrieved on 24 November...
Read More