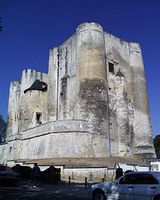 :Not to be confused with the Château d'Aniort, near the village of Niort, Aude

The Donjon de Niort or Château de Niort (the former is most often used today) is a medieval castle in the French town of Niort in the département of Deux-Sèvres. It consists of two square towers, linked by a 15th century building and dominates the Sèvre Niortaise valley.

The two donjons are the only remaining part of the castle. The castle was started by Henry II Plantagenet and completed by Richard the Lionheart. It was defended by a rectangular curtain wall and was damaged during the Wars of Religion. From the 18th century, the castle served as a prison.

Origins of the present castle

Following Henry II's marriage to Eleanor of Aquitaine, the English Crown controlled most of western France. Needing a secure base from which to maintain links with England, Niort was strategically placed as a site where Henry could maintain a garrison and supplies of personnel and weapons. He chose a site on the banks of the Sèvre on an earlier site. (Historians differ over the attribution; a recent hypothesis suggest that Henry's son Richard the Lionheart may have been responsible.)

The present keeps were the central point of a massive fortress. The vast area covered by the castle extended between the River Sèvre to the markets and the modern Préfecture building to the rue Thiers, and was enclosed by an enceinte comprising approximately ten towers.