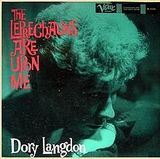 During the late 1950s and 1960s she was a lyricist for motion picture songs, and with her first husband André Previn received several Academy Award nominations. In the 1970s, after their divorce, she released six albums of original songs and an acclaimed live album. Dory Previn's lyrics from this period are characterised by their originality, their irony, and their honesty in dealing with her troubled personal life, as well as more generally about relationships, sexuality, religion and psychology. She has continued to work since then as a writer of song lyrics and prose.

She was born in Rahway, New Jersey, the eldest daughter in a strict Catholic family of Irish origin. She had a troubled relationship with her father, especially during childhood. He had served in the First World War and been gassed, which led to periods of depression and violent mood swings. He tended to alternately embrace and reject Dory, but supported her...
Read More