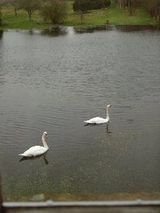 Description:
Draycot Foliat is an hamlet in Wiltshire, England, on the back road between Chiseldon to the north and Ogbourne St. George to the south. The nearest major town is Swindon which is about north. The most notable feature is probably the small Airstrip with its model helicopter instruction centre. There is one smallholding, called Draycot Farm, and a larger farm, Sheppard's Farm which comprises some 750 acres (300 hectares). Attached to Sheppard's farm is a tiny set of industrial buildings, most notably, the Intellectual Property Law Offices of Berry Davies LLP. In addition to this there are between ten and twenty other houses. The Og, a tributary of the River Kennet (itself a tributary of the Thames), flows for about half of the year down the centre of the hamlet forcing the road into a sharp hairpin bend.

In 1086 it was recorded that Draycot had enough land for six ploughs, and at the time, there were two ploughs and a serf on five hides held in the demesne while there were three ploughs, four villeins and seven bordars on the remaining hides. There were in total of pasture and eighteen of meadow at the time of the Domesday Survey. By 1842 there were of arable land, of meadow and of woodland within the parish, split among the three farms, Draycot, Sheppard's and Kings. In 1849, King's farm was offered for sale, and bought by Draycot farm, giving the situation found today.

Since the...
Read More