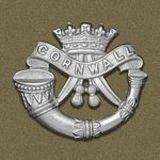 Description:
The Duke of Cornwall's Light Infantry (DCLI) was an infantry regiment of the British Army from 1881 to 1959. Its lineage is continued today by The Rifles.

The regiment was created on 1 July 1881 as part of the Childers Reforms, by the merger of the 32nd Regiment of Foot and the 46th Regiment of Foot. The DCLI also incorporated the militia and rifle volunteers of Cornwall.

Under the Childers system, one regular battalion of each regiment was to be at a "home" station, while the other was abroad. Every few years, there was to be an exchange of battalions. In the period from the regiment's formation to the outbreak of the Second Boer War the two regular battalions were stationed as follows:

In October 1899 war broke out between the United Kingdom and the Boer Republics. The 2nd Battalion arrived in South Africa in the following month, where it took part in minor actions on the western border of the Cape Colony. In February 1900 it became part of the 19th Brigade. It saw action against the Boers at Paardeburg, and in March 1900 entered Bloemfontein. It continued to take part in a series of skirmishes until the end of the war....
Read More