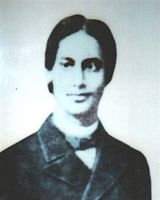 Description:
The first four decades in the life of Rabindranath Tagore (1861–1941) were formative of both his artistic and much of his political thinking. He was a Bengali poet, Brahmo philosopher, and scholar.

Tagore was born at No. 6 Dwarkanath Tagore Lane, Jorasanko — the address of his family mansion. In turn, Jorasanko was located in the Bengali section of north Kolkata (Calcutta; Bangla: কলকাতা) , located near Chitpur Road. He was the son of Debendranath Tagore(1817–1905) and Sarada Devi (1830–1875). Debendranath Tagore had formulated the Brahmo faith propagated by his friend, the reformer Raja Ram Mohan Roy. Debendranath became the central figure in Brahmo society after Roy's death, who was addressed out of respect by followers as maharishi. He continued to lead the Adi Brahmo Shomaj until he died. Women who married into Tagore's clan were generally from the villages of East Bengal (now Bangladesh)

Tagore, nicknamed "Rabi," was born the youngest of fifteen children (fourteen survived to adulthood). As a child, Tagore lived amidst an...
Read More