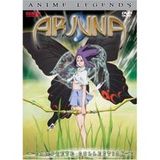 Description:
is a Japanese animated television series created by Shoji Kawamori. The series follows Juna Ariyoshi, a high school girl chosen to be the "Avatar of Time" and entrusted with saving the dying Earth.

"Arjuna" refers to the legendary archer Arjuna from the Hindu epic Mahābhārata, which explains why Juna's weapon against the Raaja is a bow.

Arjuna aired on TV Tokyo from January 9, 2001 to March 27, 2001, totaling 12 episodes. The DVD release ("Arjuna: Director's Cut") featured remastered video and sound, and a previously unbroadcast "Chapter 9". Subsequent re-runs of the series on Animax include the DVD-only episode.

The story opens with Juna telling her boyfriend Tokio she feels too cramped in the city, and deciding to take a trip to the Sea of Japan. On the drive, they get in an accident and Juna dies. As the spirit leaves her body, Juna sees the dying Earth. The planet's suffering is visualized by worm-like creatures, the Raaja. The Raaja vary in size, from microscopic bacteria to those entwining the planet. A young boy named Chris appears before Juna and offers to save her life if she will help the planet. She agrees and is resurrected.

Supported by SEED, an international organization that monitors the environment and confronts the Raaja, Chris hopes that Juna can save the world.

Juna is a girl in the tenth grade, who is recognised by Chris to be the "Avatar of Time", to save the planet. A magatama...
Read More