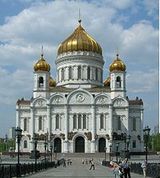 Description:
An Orthodox church as a church building of Eastern Orthodoxy has a distinct, recognizable style among church architectures.

While sharing many traditions, East and West in Christianity began to diverge from each other from an early date. Whereas the basilica, a long aisled hall with an apse at one end, was the most common form in the West, a more compact centralised style became predominant in the East.These churches were in origin 'martyria' focused on the tombs of the saints—specifically, the martyrs who had died during the persecutions, which only fully ended with the deathbed conversion of the Emperor Constantine. They copied pagan tombs and were roofed over by a dome which symbolised heaven. The central dome was then often surrounded by structures at the four points of the compass producing a cruciform shape - these were themselves often topped by towers or domes. The centralised and basilica structures were sometimes combined as in the church of Hagia Sophia in Constantinople. The basilican east end then allowed for the erection of an iconostasis, a screen on which icons are hung and which conceals the altar from the worshippers except at those points in the liturgy when its doors are opened.

A variant form of the centralised church was developed in Russia and came to prominence in the 16th century. Here the dome was replaced by a much thinner and taller hipped or conical roof which, it is said, originated from the need to prevent snow from remaining on...
Read More