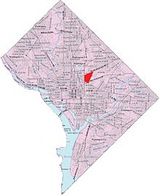 Description:
Eckington is a neighborhood in Northeast Washington, D.C. located south of the Prospect Hill and Glenwood Cemeteries. Eckington is less than one mile (1.6&nbsp;km) southeast of Howard University and exactly one mile north of the United States Capitol. Eckington is also the home of the District of Columbia office of Sirius XM Radio.

The boundaries of Eckington are Rhode Island Avenue to the north, Florida Avenue to the south, North Capitol Street to the west, and Washington Metro's Brentwood Yard to the east.

The land which became Eckington was the country home of Joseph Gales, Jr., owner of the National Intelligencer newspaper and Mayor of Washington from 1827 to 1830. Gales bought the Northeast tract in 1815, and in 1830 erected a two-story house on the hilltop, about where Third and U Streets intersect today. Gales named his estate Eckington after The Village in England in which he was born.

During the American Civil War, the house was used as a hospital for the 7th Regiment of New York. After the war, Eckington, commonly known as Gales Woods, was a popular picnic ground. According to the Evening Star newspaper, February 25, 1934, "immense cans of ice cream and barrels of lemonade were always on hand to refresh the children with, when they were tired out from running in the woods, playing games and swinging in the grapevine swing".

In 1887, Eckington was bought by George Truesdell and his wife Frances, who subdivided the property, improved it...
Read More