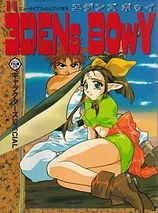 Description:
is manga series written and illustrated by Kitsune Tennouji. It was originally published in the magazine Comptiq, but it soon moved to Shōnen Ace after the latter publication's creation in 1994. Eden's Bowy was adapted into a 26-episode anime series by Studio Deen in 1999.

The story is set in a strange world where two floating islands named Yulgaha and Yanuess slowly move through the sky above the land. The people on the ground named these islands "Ëdens", and they control all the land. A boy, Yorn, was born on Yulgaha, but in his infancy, he was separated from his mother and brought to live on the surface. Although the foster father that raised him was poor, Yorn grew into a bright, chipper young man.

One day, Yorn is attacked by Hairra, a woman who is later revealed to be a puppet from Yulgaha, while he is forging a sword. When she breaks the sword and attempts to kill him, his father sacrifices himself to save Yorn. Hairra proceeds to incapacitate Yorn, but is prevented from killing him by the arrival of a mysterious young girl. The girl picks up the hilt of Yorn's sword and drives it into her hand, magically transforming it into the sword of the God hunter.

Hairra attempts to kill her, but she transforms into a young woman armed with a staff (Seeda) and fights back. During this battle, Yorn's powers as a God-Hunter are awakened by the sword and he enters the battle. Using a massive energy blast emanating from the sword, he drives off Hairra and her...
Read More