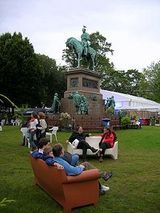 The Book Festival originally took place in a tent in Edinburgh in 1983. At first a biannual event, the Festival became yearly in 1997. It is now a large (ever-growing) international event, central to Edinburgh's acclaimed August arts celebrations. Perhaps as a result of this, Edinburgh was named the first UNESCO City of Literature in 2004.

There are over 700 events for both adults and children in the three weeks that the Book Festival runs. They range from writing workshops, education events, panel discussions, to talks and performances by international writers, poets, musicians and thinkers.<br />Recent festivals have featured the likes of:<br /><br />