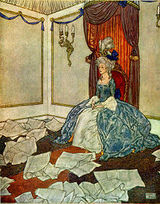 Born in Toulouse, France, he began his career by studying law at the University of Toulouse. He also studied art, switching to it full time after he became bored with law, and having won prizes at the Ecole des Beaux Arts. He spent a very brief period at the Académie Julian in Paris in 1904 before moving to London.

In London, the 22-year old Frenchman was picked up by J.M. Dent and given a commission to illustrate Jane Eyre. He then began an association with the Leicester Gallery and Hodder & Stoughton; the gallery commissioned paintings from Dulac which they sold; the rights to the paintings were purchased by Hodder & Stoughton, who used them as illustrations in illustrated books, publishing one book a year. Books produced under this arrangement by Dulac include Stories from The Arabian Nights in 1907, with 50 colour images; an edition of William Shakespeare's The Tempest in 1908, with 40 colour illustrations; The Rubaiyat of Omar Khayyam in 1909, with 20 colour images; The Sleeping Beauty and Other Fairy Tales in 1910; Stories from Hans Christian Andersen in 1911; The Bells and Other Poems by Edgar Allan Poe in 1912, with 28 colour images and many monotone...
Read More