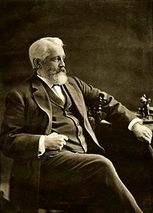 He was born in Brookline, Massachusetts. In the decade before the Civil War, Atkinson was a successful entrepreneur as an executive of some of the leading cotton mills of New England. Later, he was head of the Boston Insurance Company.

He also fought against slavery by supporting the Free-Soil Party and a Boston committee to aid escaped slaves. Growing weary of compromise, he soon began raising money to pay for rifles and ammunition to support the insurgent guerrilla force of John Brown. In 1866 he was chosen a delegate to the national union convention, held in Philadelphia, but he took no part in its deliberations. He was elected a Fellow of the American Academy of Arts and Sciences in 1879.

Inspired by the ideas of Adam Smith, Richard Cobden, and John Bright, Atkinson became a leading publicist for free trade. In many ways, he can be described as the American counterpart to Frédéric Bastiat. He spoke out against the inflationist ideas of William Jennings Bryan and others but, unlike some, favored the total denationalization, or privatization, of money..

He campaigned for Grover Cleveland and participated in the formation of the Clevelandite National Democratic Party third party in 1896. Atkinson was appalled by the colonialist and...
Read More