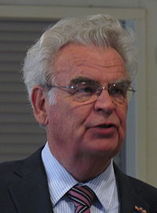 Description:
Egbert Schuurman (born July 23, 1937 in Borger) is a professor of philosophy in the Netherlands, whose teaching is most concerned with exploring and developing Reformational philosophy and its organized expression, the Association for Reformational Philosophy. He studied under Hendrik Van Riessen. Schuurman has three related appointments to External Professorial Chairs, an arrangement with the Dutch government, at the technical state universities of Delft, Eindhoven, and Wageningen (the latter in large part devoted to agriculture). From 1983 to 2011 he was also a member of the Dutch Senate, serving among others as the Caucus Chairman for the ChristianUnion party caucus and Senate group leader (succeeded by Roel Kuiper).