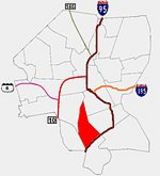 Description:
Elmwood is a neighborhood in the South Side of Providence, Rhode Island. The triangular region is demarcated by Broad Street, Elmwood Avenue, and Interstate 95.

Prior to the 1850s, the region had been used primarily as farm land. Then, in the late 18th and early 19th centuries, as the city began to expand south and west with the development of manufacturing and shipping interests, the area began to develop. In the 1840s through 1860s, as the city of Providence expanded from a population of 23,000 to past 50,000, development crept southwestward along Broad Street. As areas began to be densely populated, the remaining farms were subdivided.

The neighborhood takes its name from one of its principal developers, Joseph J. Cooke, who in 1843 purchased a large tract of farm land and named the estate "Elmwood". He and other developers sought to built a model suburban community with wide streets and shade-giving elm trees.

As public transportation improved from omnibuses (horse-drawn carriages) to horse-drawn tracked cars, and finally to electrified streetcars, development began to quicken pace. A number of manufacturers moved to Elmwood, while the area near Public St, Elmwood Ave, and Potters Ave began to develop as a middle to upper class residential neighborhood.

As the automobile came to increase in popularity, businesses in the form of car dealerships, garages, and service stations would proliferate along...
Read More