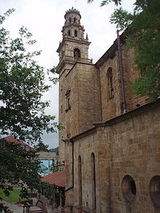 Description:
Elorrio is a town and municipality located in the province of Biscay, in the autonomous community of the Basque Country, northern Spain.

Elorrio lies in eastern Biscay, in the mountainous terrain of the Durangaldea commonwealth, at the point where the provinces of Biscay, Guipuzkoa, and Araba meet. The town is surrounded by various mountains, such as Intxorta (797m) and Udalatx (1092m), and is traversed by the River Zumelegi that, after joining the River Arrazola in Atxondo, goes on to form the River Ibaizabal.

The town is situated 39km from the provincial capital of Bilbao, and its population (as of 2004) is 7,112 inhabitants.

The Argiñeta tombs that today lie just outside the town of Elorrio are both pre-Christian and Christian (the earliest date of the latter is recorded as 893). In 1053, the San Agustín de Etxebarria monastery was founded, which in time was renovated and eventually became present-day church (an example of Gothic architecture). In 1356, Don Tello, Lord of Biscay, officially created Elorrio (through a foundational charter) on the land where the monastery stood, as a means of creating a town to defend his borders against invasion from neighboring Gipuzkoa. In 1468 the town was the site of a major battle between warring clan factions in the Basque Country (the Oñacinos and the Gamboinos). However, incidents of this type decreased, and between the sixteenth and the eighteenth centuries, the town's fortunes grew, gaining renown for its...
Read More