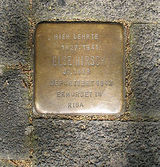 Description:
Else Hirsch (29 July 1889 &ndash; 1942 or 1943) was a Jewish teacher in Bochum, Germany and a member of the German Resistance against the Third Reich. She organized transports of Jewish children to the Netherlands and England, saving them from Nazi deportation to concentration camps and death. Hirsch was killed in the Riga Ghetto.

Born in Bützow, Schwerin, Hirsch came from Berlin to Bochum at the end of 1926 and lived with her mother. She had taken her teaching exam to qualify as a teacher of older children, but was unemployed and was assigned (and required) to teach at the Jewish school. She was initially less than pleased with this, but soon threw herself into her work. In her free time, Hirsch worked at the Bochum Jewish Women's Club and gave Hebrew lessons to girls, until these activities were denied her by the Nazis in autumn 1933. Karin Finkbohner, Betti Helbing, Carola Horn, Anita Krämer, Astrid Schmidt-Ritter, Kathy Vowe. Wider das Vergessen — Widerstand und Verfolgung Bochumer Frauen und Zwangsarbeiterinnen 1933 – 1945, pgs. 62-63. Europäischer Universitätsverlag; ISBN 9783932329623

In October 1937, she took a course in English at the Reichsvertretung der Deutschen Juden in Berlin in order to be able to give English lessons to those who might be able to...
Read More