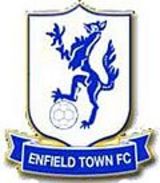 Description:
Enfield Town F.C. is an English football club from Enfield Town, Greater London. Established in 2001 as a fan-led breakaway from Enfield FC, the club currently play in Division One North of the Isthmian League and will move to the Queen Elizabeth II stadium early in the 2011–12 season, playing home matches at the Cheshunt Stadium in Cheshunt until the move.

The club was founded on 23 June 2001 by the Enfield Supporters' Trust after Trust members considered that the regime in charge of Enfield FC no longer had the interests of the club at heart and lacked sufficient will to bring about the return of the club to its home town, having left Southbury Road in 1999. This followed the chairman of Enfield FC backing out of an outline agreement with the Supporters' Trust which would have seen the Trust take over the running of a debt-free club and receiving £100,000 from money from the sale of Southbury Road which was held in an escrow account by Enfield Council. The balance of over £600,000 would have been paid to the chairman.

Playing at Brimsdown Rovers' Goldsdown Road ground, the newly-formed club were admitted to the Essex Senior League for the 2001–02 season, three divisions below the Isthmian League Premier Division where Enfield continuted to play. The club's first season saw them finish second in the league and win...
Read More