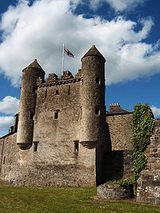 Description:
Enniskillen Castle is situated in Enniskillen, County Fermanagh, Northern Ireland. The first castle was built on this site by Hugh Maguire in the 16th century. It consists of two sections, a central keep and a curtain wall and provided the main defence for the west end of the town and guarded the Sligo road. It has been substantially rebuilt. It is a State Care Historic Monument, at grid ref: H2315 4422.

It featured greatly in Irish rebellions against English rule in the 16th century and was taken after an eight day siege in 1594. In 1607 it was remodelled and refurbished by Captain William Cole. The riverside tower at the south, known as the Watergate, was added at this time.

In the 18th century the castle was remodelled as the Castle Barracks.

The castle is now home to the Fermanagh County Museum, which focuses on the county's history, culture and natural history. Exhibits include the area's prehistory, natural history, traditional rural life, local crafts and Belleek Pottery, and history of the castle.