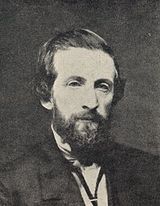 He was born in Oswego County, New York, United States, in 1821. He had a sibling: Irwin Pedro Beadle (1826-1882). They were the grandsons of Benjamin Beadle, a Revolutionary War soldier. After a temporary move to Michigan, the Beadle family returned to New York, and lived in Chautauqua County, New York. Erastus worked for a miller named Hayes, where he began his printing career when cutting wooden letters to label bags of grain. In 1838, he was apprenticed to H & E Phinney, a publishing firm in Cooperstown, New York. There he learned typesetting, stereotyping, binding, and engraving. He married Mary Ann Pennington in 1846, and in 1847 the couple moved to Buffalo, New York, where Erastus worked as a stereotyper. In 1849 Irwin went to Buffalo too, and found a job as a bookbinder. The next year, the brothers set up their own stereotype foundry. Irwin left the company in 1856 and went to the Nebraska Territory where he acted as a secretary for a company settling the town of Saratoga. The town was busted in 1857, and Beadle returned to Nebraska shortly thereafter.

His papers are archived at the University of Delaware.