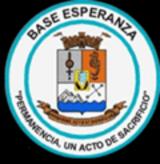 Built in 1952, the base houses 55 inhabitants in winter, including 10 families and 2 school teachers. Provincial school #38 "Julio Argentino Roca" was founded in 1978 and acquired independent status in 1997. The LRA 36 Radio Nacional Arcángel San Gabriel radio station started transmitting in 1979.

The 43 buildings of the station have a combined space of covered;Google Earth satellite images of fuel are used annually by the 4 generators to produce electricity for the station. Research projects include: Glaciology, Seismology, Oceanography, Coastal Ecology, Biology, Geology and Limnology.

Esperanza Base has some measure of fame because it is the birthplace of Emilio Marcos Palma, the first person to be born in Antarctica. The Base has tourist facilities that are visited by approximately 1,100 tourists each year.