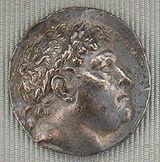 Description:
Eumenes I was dynast (ruler) of the city of Pergamon in Asia Minor from 263 BC until his death in 241 BC. He was the son of Eumenes, the brother of Philetaerus, the founder of the Attalid dynasty, and Satyra, daughter of Poseidonius. As he had no children, Philetaerus adopted Eumenes to become his heir.

Although nominally under Seleucid control, Pergamon under Philetaerus enjoyed considerable autonomy. However, upon his succession, Eumenes, perhaps with the encouragement of Ptolemy II, who was at war with the Seleucids, revolted, defeating the Seleucid king Antiochus I near the Lydian capital of Sardis in 261 BC. He was thus able to free Pergamon, and greatly increase the territories under his control. In his new possessions, he established garrison posts in the north at the foot of Mount Ida called Philetaireia after his adoptive father, and in the east, northeast of Thyatira near the sources of the river Lycus, called Attaleia after his grandfather, and he extended his control south of the river Caïcus to the Gulf of Cyme as well. Demonstrating his independence, he began to strike coins with the portrait of Philetaerus, while his predecessor had still depicted Seleucus I Nicator.

After the revolt from the Seleucids, there are no records of any further hostilities involving Pergamon during the Eumenes' rule, even though there continued to be conflict between the Seleucids and the Ptolemies, and even though the Gallatian Gauls were continually plundering throughout the...
Read More