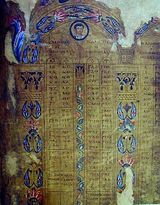 Description:
Eusebian canons or Eusebian sections, also known as Ammonian Sections, are the system of dividing the four Gospels used between late Antiquity and the Middle Ages. The divisions into chapters and verses used in modern texts date only from the 13th and 16th centuries, respectively. The sections are indicated in the margin of nearly all Greek and Latin manuscripts of the Bible, and usually summarized in Canon Tables at the start of the Gospels (see below). There are about 1165 sections: 355 for Matthew, 235 for Mark, 343 for Luke, and 232 for John; the numbers, however, vary slightly in different manuscripts.Bruce M. Metzger, Manuscripts of the Greek Bible: An Introduction to Palaeography, Oxford: Oxford University Press, 1991, p. 42. ISBN 978-0-19-502924-6

Until the 19th century it was mostly believed that these divisions were devised by Ammonius of Alexandria, at the beginning of the 3rd century (c. 220), in connection with a Harmony of the Gospels, now lost, which he composed. It was traditionally believed that he divided the four Gospels into small numbered sections, which were similar in content where the narratives are parallel. He then wrote the sections of the three last Gospels, or simply the section numbers with the name of the respective evangelist, in parallel columns opposite the corresponding sections of the Gospel of Matthew, which he had chosen as the basis of his Harmony. Now it is believed that the work of Ammonius was...
Read More