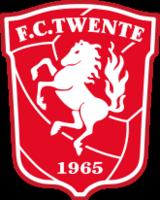 Description:
FC Twente () is a Dutch professional football club from the city of Enschede, playing in the Eredivisie. The club was formed in 1965 by the merger of 1926 Eredivisie Champions, Sportclub Enschede and Enschedese Boys. They are the current holders of KNVB Cup and Johan Cruijff Schaal trophies, and were Eredivisie champions in the 2009–10 season; the team have also finished as Eredivisie runners-up thrice, were runners-up in the UEFA Cup 1974–75, and have won the KNVB Cup three times. Twente's home ground since 1998 is De Grolsch Veste.

The club was formed in 1965 as a merger of two professional clubs, Sportclub Enschede and the Enschedese Boys. One of such predecessors, SC Enschede, had also won a single Eredivisie title in 1926.

The first successes of the club started just after the merger of 1965, under coach Kees Rijvers. Twente finished third in 1969, fourth in 1970, fifth in 1971, third in 1972 and once again in 1973. The team's key figures were local heroes, such as Epi Drost, Eddy Achterberg, Kick van der Vall and Theo Pahlplatz. Their finest Eredivisie season was 1973–1974, in which Twente battled for the Dutch championship with Feyenoord. A head-to-head confrontation in the very last game of the season, in Rotterdam, had to bring the decision. Feyenoord were slightly luckier: 3–2. A second slot and a UEFA Cup ticket—that was all for FC Twente.

However, the Tukkers (as people from the Dutch region of Twente are...
Read More