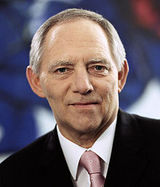 Description:
The Federal Ministry of Finance () is part of the German federal government and is responsible for managing the federal budget. The finance minister is the only minister who can veto a decision of the government if it would lead to additional expenditure. The current minister of finance is Wolfgang Schäuble, of the CDU.

Following the Unification of Germany, fiscal policy was predominantly the domain of the various states of Germany. The states were responsible for all direct taxation, and the federal government received indirect contributions from the states. Matters of fiscal policy at the federal level was the responsibility of the Chancellor's Office. However, in 1879, the Imperial Treasury (Reichsschatzamt) was founded. It was initially headed by an Under-Secretary of State, and eventually by a Secretary of State. It became a federal ministry, the Reichsministerium der Finanzen, headed by a federal minister, in 1919, and was renamed the Bundesministerium der Finanzen in 1949.

Since 1999, the Air Ministry Building in Berlin has been the headquarters of the ministry.