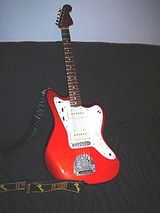 Description:
The Fender Jazzmaster is an electric guitar designed as an upmarket sibling to the Fender Stratocaster. First introduced at the 1958 NAMM Show, it was initially marketed at jazz guitarists, but found favor among surf rock guitarists in the early 1960s. It is frequently confused with the similar looking albeit tonally different Jaguar.

The contoured "offset-waist" body was designed for comfort while playing the guitar in a seated position, as many jazz and blues artists prefer to do. A full 25½” scale length, lead and rhythm circuit switching with independent volume and tone controls, and a floating tremolo with tremolo lock, were other keys to the Jazzmaster's character. The tremolo lock can be manually activated to keep the entire guitar from going out of tune if one string breaks. The Jazzmaster also had an extra-long tremolo arm.

The body is larger than that of other Fender guitars, requiring a more spacious guitar case. The Jazzmaster had unique wide, white "soapbar" pickups that were unlike any other single coil. Jazzmaster pickups are often confused with Gibson's P-90 pickups. Although their construction is similar, it is not identical. The coil is wound flat and wide, in contrast to Fender's usual tall and thin coils. This gives them a warmer tone without losing their single coil clarity. The Jazzmaster has a mellower, jazzier tone than the Strat, although it was not widely embraced by jazz musicians. Instead, rock guitarists...
Read More