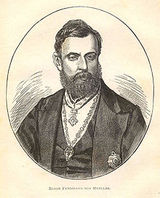 Mueller was born at Rostock, Germany. After the early death of his parents, Frederick and Louisa, his grandparents gave him a good education in Tönning, Schleswig. Apprenticed to a chemist at 15, he passed the pharmaceutical examinations and studied botany under Professor Nolte at Kiel. He received his doctorate in 1847 from Kiel University. He received the degree of Doctor of Philosophy when he was 21 for a thesis on the flora of Schleswig-Holstein.

In 1847, having been advised to go to a warmer climate, he sailed for Australia with two sisters from Bremen. It is said that, still on the ship, he already fished the first plants out of the water to analyse them.

He arrived at Adelaide on 18 December 1847 and found employment as a chemist. Shortly afterwards, he obtained of land not far from Adelaide, but after living on it for a few months returned to his former employment. He travelled through the colony from 1848 to 1852, discovering and describing a large number of plants previously unknown to Western science. He contributed a few papers on botanical subjects to German periodicals, and in 1852 sent a paper to the Linnean Society at London on "The Flora of South Australia". He moved to Melbourne, capital of the new colony of Victoria in 1851.