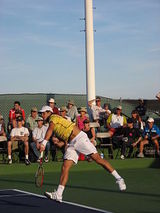 Description:
Fernando Verdasco Carmona (born 15 November 1983 in Madrid, Spain) is a professional tennis player. He is currently ranked number 22 in the world. Verdasco started playing tennis at four years of age and had a full-time coach when he was eight. As of 2009, Verdasco has been working in Las Vegas with Andre Agassi and his team including Darren Cahill (Agassi's former coach) and Gil Reyes (Agassi's fitness coach). Verdasco has aided Spain in winning two Davis Cup titles, winning the deciding match in both 2008 and 2009. His best performance in a Grand Slam was making the semi-finals of the 2009 Australian Open where he lost to compatriot and eventual champion Rafael Nadal in five sets, in what was the longest match in Australian Open history.

He turned professional in 2001, finishing as world number 464. 2002 was a good year for him, as he won his first Futures category title in Spain F1 and was runner-up in Spain F3. He played his second career challenger in Segovia, where he reached the final after beating Belarusian Vladimir Voltchkov in the semifinals. He then reached two additional Challenger semifinals in Kiev and in Eckental, finishing the year in the top 200, at 173. 2002 also finished strongly off the court, as Fernando finished runner-up in a closely contested 'Best Abs in Castilla La Mancha'. He reportedly celebrated...
Read More