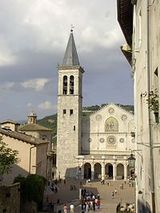 The Festival dei Due Mondi (Festival of the Two Worlds) is an annual summer music and opera festival held each June to early July in Spoleto, Italy, since its founding by composer Gian Carlo Menotti in 1958. It features a vast array of concerts, opera, dance, drama, visual arts and roundtable discussions on science.

Because Spoleto was a small town, where real estate and other goods and services were at the time relatively inexpensive, and also because there are two indoor theatres, a Roman theatre and many other spaces, it was chosen by Menotti as the venue for an arts festival. It is also fairly close to Rome, with good rail connections.

The festival has developed into one of the most important cultural manifestations in Italy, with a three-week schedule of music, theater and dance performances. For some time it became a reference point for modern sculpture exhibits, and works of art left to the city by Alexander Calder and others are a testimony to this. For a variey of reasons, including loss of funds and the birth of many similar festivals throughout Italy, the Spoleto Festival has now lost some of its international prominence; however, it remains a very important cultural event.

The "Two Worlds" in the name of the festival comes from Gian Carlo Menotti's intention to have the worlds of American and European culture facing...
Read More