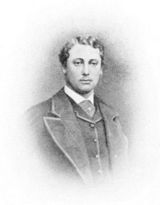 Description:
The Festival Te Deum is the popular name for an 1872 composition by Arthur Sullivan, written to celebrate the recovery of Albert Edward, Prince of Wales (later King Edward VII of the United Kingdom) from typhoid fever. The prince's father, Prince Albert, had died of typhoid fever in 1861, and so the prince's recovery was especial cause for celebration.

The Festival Te Deum was first performed on 1 May 1872 at The Crystal Palace in a special "Thanksgiving Day" concert organised by the Prince's brother, Alfred, Duke of Edinburgh, who was a friend of Sullivan's and commissioned the piece. Sullivan was allowed to dedicate the work to the prince's mother, Queen Victoria: an unusual honour. The soloist was Therese Titiens, who had been the soprano soloist in Sullivan's earlier The Prodigal Son.

The libretto uses an English translation of the traditional Te Deum, in praise of God, with the addition of a "Domine salvum fac" ("O Lord, save the Queen!"), divided up into seven self-contained sections. There are multiple choral fugues throughout, and the score calls for instrumentation on a grand scale, including the addition of a full military band to the orchestra, chorus, and organ in the final section.

At the original performance, the London contingent of the Handel Festival Choir of 2,000 performers constituted the chorus, and the audience numbered 26,000.<ref...
Read More