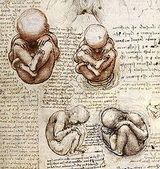 Description:
Fetal position (British English: also foetal) is a medical term used to describe the position of the body of a prenatal fetus as it develops. In this position, the back is curved, the head is bowed, and the limbs are bent and drawn up to the torso.

This position is used in the medical profession to minimize injury to the neck and chest.

Sometimes, when a person has suffered extreme physical or psychological trauma (including massive stress), they will assume the fetal position or a similar position in which the back is curved forward, the legs are brought up as tightly against the abdomen as possible, the head is bowed as close to the abdomen as possible, and the arms are wrapped around the head to prevent further trauma. This position provides better protection to the brain and vital organs than simply lying spread out on the ground, so it is obvious as to why it is an instinctual reaction to extreme stress or trauma when the brain is no longer able to cope with the surrounding environment, and in essence "shuts down" temporarily.

Many people assume this position when sleeping, especially when the body becomes cold.

A study by Professor Chris Idzikowski, director of the Sleep Assessment and Advisory Service found that people who sleep in the fetal position consistently tend to...
Read More