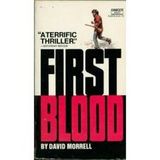 Description:
First Blood is a 1972 novel by David Morrell, on which the first film of the Rambo movie franchise was based.

The book begins with Rambo, a Vietnam War veteran, hitch hiking in Madison, Kentucky. He is picked up by Sheriff Teasle and dropped off at the city limits. Repeatedly coming back, Teasle arrests him and drives him to the station. He is charged with vagrancy and resisting arrest and is sentenced to 35 days in jail. Being trapped inside the cold, wet, small cells gives Rambo a flashback of his days as a POW in Vietnam, and he fights off the cops as they attempt to cut his hair and shave him, beating one man and slashing another with the straight razor. He flees, steals a motorcycle, and hides in the nearby mountains. He becomes the focus of a manhunt that results in the deaths of many police officers, civilians and National Guardsmen.

In a climactic ending in the town where his conflict with Teasle began, Rambo is finally hunted down by special forces Captain Sam Trautman and Teasle. Teasle, using his local knowledge, manages to surprise Rambo and shoots him in the chest, but is himself wounded in the stomach by a return shot. He then tries to pursue Rambo as he makes a final attempt to escape back out of the town. Both men are essentially dying by this point, but are driven by pride and a desire to justify their actions. Rambo, having found a spot he feels comfortable in, prepares to commit suicide by detonating a stick of dynamite against his body; however, he...
Read More