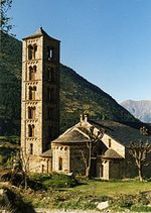 Description:
First Romanesque is the name due to Josep Puig i Cadafalch to refer to the Romanesque art developed in Catalonia since the late 10th century.

The geographical proximity of this Iberian region to the rest of Europe was brought in Catalonia demonstrations of the emerging Romanesque art. While the art failed to take root in the rest of the Iberian Peninsula until the second third of the 11th century in the Catalan counties are numerous examples above, if not fully Romanesque, do contain many of the defining characteristics of this artistic style.

To avoid the term Pre-Romanesque often used with a meaning much broader than generally fits to early Medieval and early Christian art, and in Spain the Visigothic, Asturias, Mozarabic and Repoblación, Puig i Cadafalch preferred to use the term "First Romanesque" or "first Romanesque art" to designate those Catalan anticipations of the Romanesque itself. This term is now commonly accepted.

During the first quarter of the 11th century can be seen a great architectural activity by groups composed of Lombard teachers and stonemasons who worked in all Catalan territory, erecting temples fairly uniforms.The Monastery of Santa Maria de Roses of 1022 it is the oldest of Lombard features in Catalonia The large impeller and diffuser (and sponsor) of this art was Oliva, monk and abbot of the monastery of Ripoll, which in 1032 ordered extending this building with a body up front where two towers, plus a...
Read More