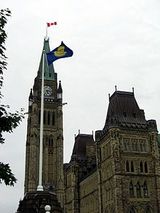 Flag Of The Commonwealth Of Nations

Flag of the Commonwealth of Nations

The flag consists of the Commonwealth symbol in gold on a blue field. The symbol centres on a globe, representing the global nature of the Commonwealth and the breadth of its membership. The globe is surrounded by 61 radiating, approximately quadrilateral, spears, which form a 'C' for 'Commonwealth'. The number of spears does not represent the number of member states (there have never been 61 members); instead, the large number represents the many ways in which the Commonwealth cooperates around the world.

The colours used on the flag are Pantone 287 for the blue and Pantone 108 for the gold.

The flag developed from car pennants produced for the first time at the 1973 Commonwealth Heads of Government Meeting, held in Ottawa, Canada. The initiative for its design is credited to two Canadians: the first Commonwealth Secretary-General, Arnold Smith; and Prime Minister Pierre Trudeau. It was officially adopted on 26 March 1976.