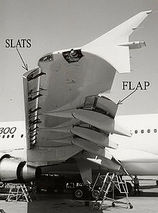 Description:
Flaps are hinged surfaces on the trailing edge of the wings of a fixed-wing aircraft. As flaps are extended, the stalling speed of the aircraft is reduced, which means that the aircraft can fly safely at lower speeds (especially during take off and landing). Flaps are also used on the leading edge of the wings of some high-speed jet aircraft, where they may be called Krueger flaps

Some trailing edge flap systems increase the planform area of the wing in addition to changing the camber. In turn, the larger lifting surface allows the aircraft to generate a given amount of lift with a lower speed, thus further reducing stalling speed. Although this effect is very similar to increasing the lift coefficient, raising the planform area of the wing does not itself raise the lift coefficient. The Fowler flap is an example of a flap system...
Read More