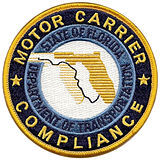 The Florida Transportation Commission, made up of nine commissioners chosen by Florida's Governor and Legislature, provides oversight for FDOT.

Each of FDOT's eight semi-autonomous districts is managed by a District Secretary. Following the 2002 legislation, the Turnpike District (now known as Florida's Turnpike Enterprise) secretary became known as an executive director.

There are seven geographic districts, and the Florida's Turnpike Enterprise (FTE). The FTE owns and maintains 460-miles of toll roads, excluding the Sunshine Skyway Bridge, Alligator Alley, Orlando-Orange County Expressway Authority, and the Pinellas Bayway System, which are owned and managed by the local FDOT districts. Tolls on those facilities, however, are collected by the FTE.