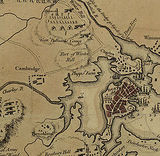 Description:
The Fortification of Dorchester Heights was a decisive action early in the American Revolutionary War that precipitated the end of the siege of Boston and the withdrawal of British troops from that city.

On March 4, 1776, troops from the Continental Army under George Washington's command occupied Dorchester Heights, a series of low hills with a commanding view of Boston and its harbor, and mounted powerful cannons there. General William Howe, commander of the British forces occupying the city, considered contesting this act, as the cannon threatened the town and the military ships in the harbor. After a snowstorm prevented execution of his plans, Howe decided instead to withdraw from the city. The British forces, accompanied by Loyalist who had fled to the city during the siege, left the city on March 17 and sailed to Halifax, Nova Scotia.

The siege of Boston began on April 19, 1775, when, in the aftermath of the Battles of Lexington and Concord, Colonial militia surrounded the city of Boston.Frothingham , pp. 91–93 Benedict Arnold, who arrived with Connecticut militia to support the siege, told the Massachusetts Committee of Safety that cannons and other valuable military stores were stored at the lightly defended Fort Ticonderoga, and proposed its capture. On May 3, the Committee gave Arnold a colonel's commission and authorized him to raise troops and lead a mission to capture the fort.<ref...
Read More