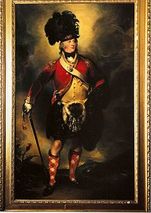 Description:
Francis Humberston Mackenzie, 1st Baron Seaforth FRS (9 June 1754 – 11 January 1815) was a British politician and general and (by right of his ancestry) Chief of the Highland Clan Mackenzie.

When he was about twelve he suffered from scarlet fever which resulted in his losing his hearing and almost all speech, from this he was known as MacCoinnich Bodhar (Deaf Mackenzie) in Gaelic. He nearly recovered the use of his tongue but during the last two years of his life, mourning the deaths of his four sons, he never made the attempt to articulate.

Mackenzie was the second son of Major William Mackenzie (died 12 March 1770), by Mary, daughter and heiress of Matthew Humberston of Humberston, in Lincolnshire. His father was the son of the Hon. Alexander Mackenzie and grandson of Kenneth Mackenzie, 4th Earl of Seaforth.

In 1784 and again in 1790 he was elected Member of Parliament for the County of Ross. In 1787 he offered to raise a regiment on his own estates to be commanded by himself. The government declined his patriotic offer but accepted his services in procuring recruits for the 74th and 75th. On 19 May 1790 he renewed his...
Read More