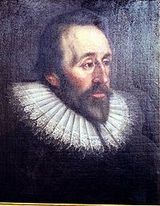 Description:
Francis Manners, 6th Earl of Rutland, KG (1578 – 1632) was an English nobleman. Despite a brief imprisonment for his involvement in the Essex Rebellion of 1601, he became prominent at the court of James I. He lived at Belvoir Castle in Lincolnshire. In 1618, three women, the "Witches of Belvoir", who worked at his castle were executed for witchcraft, having supposedly caused the premature deaths of his sons.

In 1598 he went abroad, traveling through France, Germany, and Italy. On his return to England. he took part, along with his brothers Roger and George, in the 1601 rebellion of Robert Devereux, 2nd Earl of Essex, and was imprisoned in the Poultry Counter. He was fined a thousand marks and committed to the custody of his uncle Roger at Enfield. SirRobert Cecil, however, obtained a remission of the fine, and thus the affair cost little either to him or his brother George. As soon. as hewas free he wrote a penitent letter to his uncle Sir John Manners of Haddon. In November 1601 he became a member of the Inner Temple.

Francis Manners was prominent at the court of James I, and was created a Knight of the Bath on 4 January 1605 at the same time as......
Read More