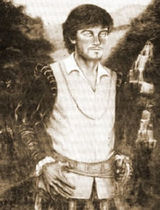 Description:
Francisco de Ibarra (1539? – 1575) was a Spanish Basque explorer, founder of the city of Durango, and governor of the Spanish province of Nueva Vizcaya, in present-day Mexico.

Francisco de Ibarra was born about 1539 in Eibar, Guipúzcoa, in the Basque Country of Spain. He went to Mexico as a young man, and upon the recommendation and financing of his uncle, conquistador and wealthy mine owner Diego de Ibarra, Francisco was placed at the head of an expedition to explore northwest from Zacatecas in 1554. The young Ibarra noted silver in the vicinity of present-day Fresnillo, but passed it by. He explored further and founded towns at San Martín and Avino, where the silver mines made him a mine owner in his own right.P. J. Bakewell (1971) Silver Mining and Society in Colonial Zacatecas 1546–1700, Cambridge: University Press, p. 28–29.

In 1562, Ibarra headed another expedition to push farther into northwest Mexico. In particular, he was searching for the fabled golden city of Copala (also called Cibola). He did not find the mythical treasure, but explored and conquered what is now the Mexican state of Durango. Ibarra was appointed governor of the newly formed province of Nueva Vizcaya (New Biscay) in 1562, and the following year he founded the city of Durango to be its capital.John Francis Bannon (1970) The Spanish Borderlands Frontier 1513–1821, Albuquerque: University of New Mexico Press, p. 29, 53–54.