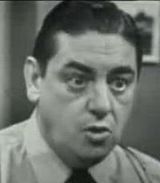 Description:
Francis "Frank" Barlow is a fictional character from the ITV soap opera Coronation Street, played by Frank Pemberton. As the head of the show's core Barlow family, Frank was one of the original twenty-one characters upon the show's inception in 1960, along with wife Ida (Noel Dyson) and sons Ken (William Roache) and David (Alan Rothwell).

In his time on Coronation Street, Frank survived the death of Ida in 1961 and entered into a controversial relationship with younger woman Christine Appleby (Christine Hargreaves). He remained in a prominent role until May 1964, when the character was written out by series producer Tim Aspinall. Pemberton later reprised the role for two further episodes, in 1967 and 1971. Frank last appeared at the funeral of daughter-in-law Valerie Barlow (Anne Reid).

Pemberton never recovered from leaving the role he adored, and suffered a stroke a year later. He found work increasingly hard to come by in the following years and suffered a fatal heart attack in 1975. Frank's son Ken later tells his son Peter (then played by Bill's son Linus Roache) of his death in April 1975.

Actor Frank Pemberton was offered the role of Frank on the day of his audition, after he had heard Granada were prepared to pay £40 a week for a 'middle-aged dad with a genuine Lancashire accent'. He later described the day as "the most exciting" of his life.<ref...
Read More